The Liftarchiv is a wonderful and astonishing way to implant art in a modernist district administration building in Munich. How did this small, lucid, mobile unit succeed not only in making political art in a certain environment but also in making art political? Susanne Clausen and Pavlo Kerestey have related complex institutions to one another and thereby created a breathtaking friction. If we attempt to analyse the situation with the help of Louis Althusser, we can say that the Kreisverwaltungsreferat (District administration department) of the Munich government is certainly a state apparatus and more specifically a Repressive State Apparatus.Althusser includes under the category Repressive State Apparatuses institutions that as part of a state complex can implement its claims to power and laws by means of violence.These institutions have, as Althusser notes, an ideological side as well. 1Hence the formally regulated course of events in an immigration authority makes the system of inclusion and exclusion seem natural: take a number and wait, fill out forms, present papers, visitors on this side of the counter and civil servants on the other – the system of inclusion and exclusion functions within a package that seems just and objective.This would be the ideological side of the government office: it naturalises, it selects, it makes causes others to forget the conditions of its own existence and the class-based nature of its decisions.

Visual art as an institution should be placed, according to Althusser, among the Ideological State Apparatuses (ISAs).This refers to the functions in a state that secures the apparatus by cultural means and educates the subjects to go along with it. Althusser defines the school as the most effective instrument for the pedagogical influence of subjects. It must be recalled, however, that he published this text in 1970, the massive extent of the totalitarian influence though mass media like television and advertising could not yet be fully imagined. In contrast to the relatively uniform Repressive State Apparatus, there are many different ISAs.They are often private institutions. 2The ISAs – or as Gramsci called it, the civil society – is thus not only an object of struggle but also the site of an ideological struggle over the dominance of certain groups. 3“The class (or class alliance) in power cannot lay down the law in the ISAs as easily as it can in the (repressive) State apparatus, not only because the former ruling classes are able to retain strong positions there for a long time, but also because the resistance of the exploited classes is able to find means and occasions to express itself there, either by the utilization of their contradictions, or by conquering combat positions in them in struggle”, 4 as Althusser explains it using the Marxist concept of class.“Class struggle”, we would say today, the negotiating of antagonistic relationships, may be conducted by ideological means, but it goes beyond that, since it is ultimately about distribution of the base (in the final analysis), that is, distribution of resources, the means relations of production and power relationships. Liftarchiv, particularly with the film Nirvana, implants a massive shake-up of the ideology otherwise cultivated there: of a “just”,“regulated” weeding out or admitting into a society based on a federal republic. Nirvana, a video performance by the Szuper Gallery, uses the immigration office at night as its setting.The “pedagogy” of the site is made visible by alienating it: because it is unusual to crawl in absurd poses through the empty halls of the immigration office at night, it suddenly becomes obvious that the “normal” movements of the visitors represent a highly artificial form of movement. “Normal” behaviour in the immigration office includes polite, patient waiting and inconspicuous movement that does not carry with it connotations of sexual desire. The “normal” sequence of events entails that the conversations between employees and the visitor-subjects will take place behind doors and hence are not seen and are certainly not transparent.The “normal” behaviour entails a series of fixed, hierarchical arrangements, a person on each side of a counter, someone familiar with bureaucratic language and the other less so – the “normal” behaviour consists of a kind of performance of objectivity and value neutrality as well as non-emotionality.The employees acted accordingly: they rejected the film and protested it. Art that is invited into a building as part of a Kunst am Bau project functions, as a rule, as a form of prestige. It implicitly separates the world of beautiful things from everyday life and confirms its autonomy – that is to say, its ineffectiveness. Here too the Liftarchiv refuses to confirm the ideological order. Instead, it refers to certain arrangements; it makes them visible as such. It alludes to the act of ennobling artefacts (objects of any kind whatever) though the act of exhibiting them, and to fantasies of surveillance, transparency and controlling that take material form in the glass palaces of modernism. 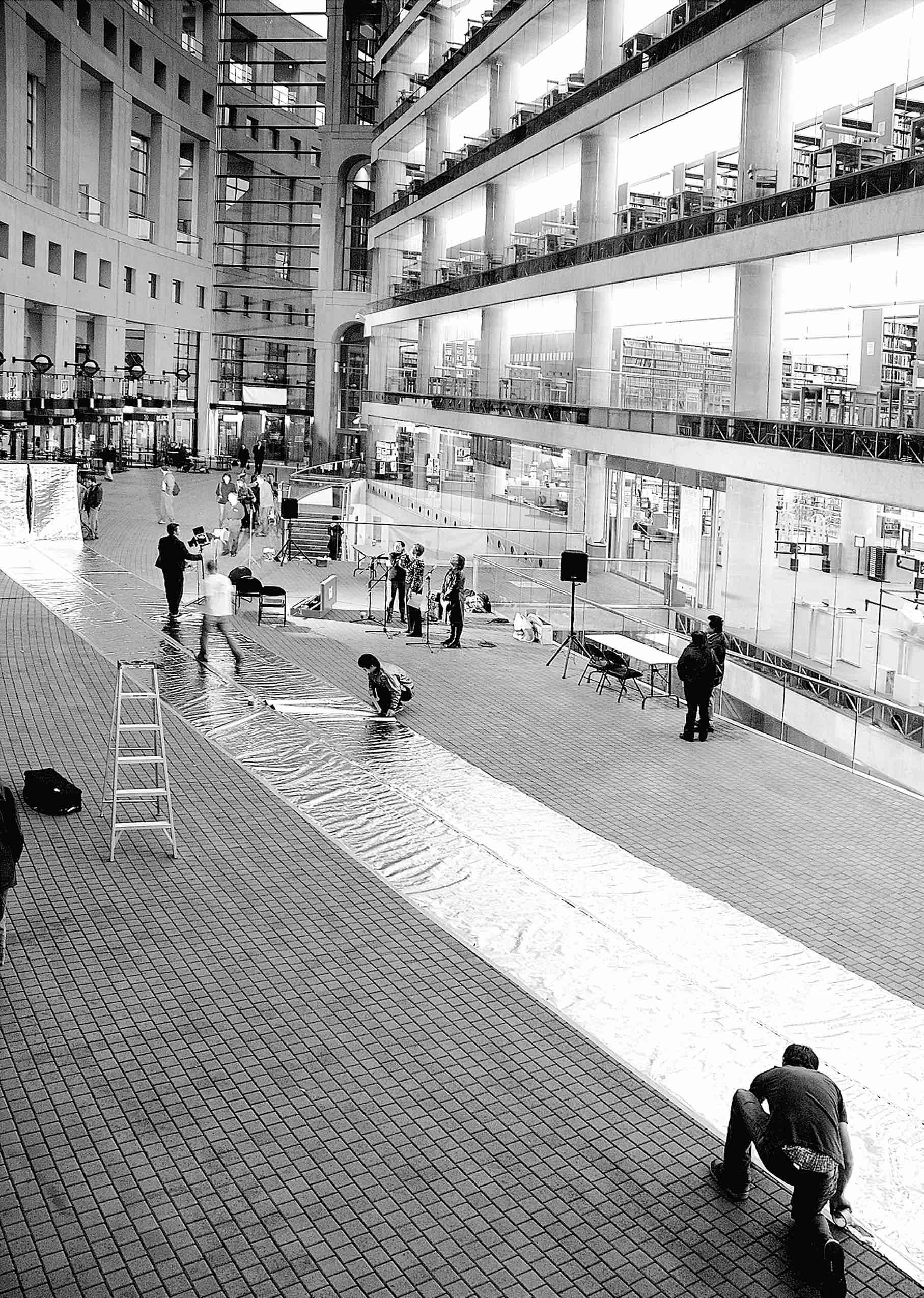 The Extras in Vancouver

Ennobling objects through the act of exhibiting them:The Liftarchiv itself can function like a space of discourse on level ground, but also like a sculpture that is elevated in a significant way and floats above the heads of the visitors and employees. Liftarchiv presents this gesture wittily and easily with a life that leads nowhere, or at least just under the ceiling of the building. Liftarchiv makes use of the situation and hangs capering under the ceiling, laying claim from this safe distance on a cheeky power to refine that is inherently disputable and available.

Modernism’s strategies of surveillance, transparency and controlling: Modernism produced a wide variety of spaces in the form of White Cubes, not only exhibition institutions but also production plants, administrative buildings and residential spaces. 5The White Cube seems, in comparison to contemporary glass palaces of production and administration, almost like protected, interior spaces. In contemporary glass palaces the motif of seeng and being seen, of subjects and objects located along a hierarchical line, plays a crucial rule. Not 92 only does it oversee, it also teaches subjects to think of themselves as being seeing and thus to be disciplined citizens of the state who act of their own responsibility, having internalized authority as permanent selfcontrol. Some notion of this becomes evident when the exhibition place itself sits in a small glass box and thus is not only visible but also observing and commenting from above.The Liftarchiv thus represents the point of intersection of discourses – of the Repressive State Apparatus and the civil society, administration and commentary, a prestige function, autonomy and pedagogy – and at the same time, admittedly, it is part of all that.

The pedagogical function that serves as the matrix on which art institutions are based was certainly perceived by the employees of the immigration authority, and it was received accordingly with reactions ranging from mistrust to rejection. Were they being made to look ridiculous or being exposed? Should they be judged from a higher vantage point? Was this thing that took the liberty of commenting in this way art at all? What did that have to do with the beautiful, which is what one justifiably expects of art? If we follow Althusser, this uncertainty is initiated on a deep level, because the ideology appeals to individuals and produces specific subjects.This process of a permanent “appellation” as employees of a “just”,“ordered” and de-sexualized governmental authority is disrupted by the Liftarchiv in several ways. It questions very concretely the criteria for sorting out people – for example, through the invitation from Schleuser.net and the habitual arrangement of the sequence of events.At the same time, it makes us uneasy about the question what “art” is as opposed to the everyday life of work. In the Liftarchiv, “art” is a setting for conversations or talk shows, for a film; “art” was a survey of the works;“art” was a film series or a large screen.The Liftarchiv offered a series of various possibilities – and its glass-box materiality suggested that it itself was a kind of empty formula. By “collaborating” with institutions like the police, Christie’s, Bloomberg Television, the London metal exchange and the Munich stock exchange, the Szuper Gallery has managed to call the pre-coded contexts into question by means of subtle vexations and to make their ideological concepts visible. In the public situation of the Liftarchiv, they took it a step further, because the Liftarchiv was accessible and available, events took place there, and employees could express themselves in a survey on the Internet. Several of the antagonistic relationships of our society were named and discussed.The fact that this did not happen without a debate with the employees of the administrative authority can only be seen as a sign of the project’s success. Only where art has created a disturbance is there a chance for thinking processes to get started. And only there where the public sphere takes the form of a discourse can art have an effect beyond its autonomous sphere on social processes.