Work in Progress: What Is to Be Done?

Staff and management of the KVR do not tolerate the installation “Do we really need a new Anti-Imperialism” and they decide to cover the text and video with white paper. Thereby a new presentation is being created, a “collaboration” between KVR, schleuser.net und Szuper Gallery. 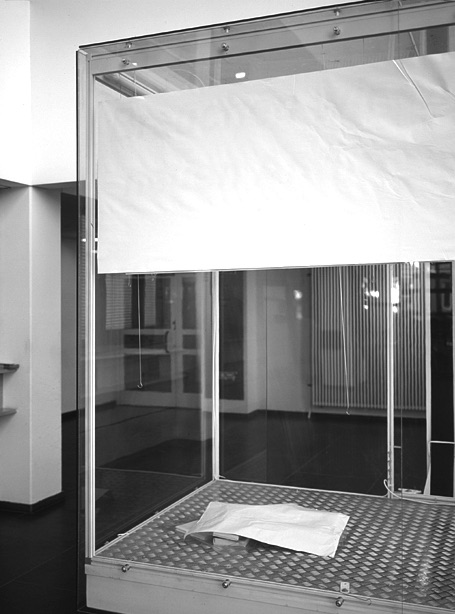 Announcement of the Closing Party:

On 19 September 2003 the installation “Do We Really Need a New Anti-imperialism?” – a work by schleuser.net in the Szuper Gallery’s Liftarchiv in the Kreisverwaltungsreferat (KVR; District administration department).After four weeks the work was transformed by this government office of Munich, the capital of the state of Bavaria, acting on its own.We – that is, the Szuper Gallery and schleuser.net – understood this change as a new artistic work that referred by to the presentation by schleuser.net and to the Liftarchiv. Art in public spaces is frequently subjected to certain processes of change – for example, as a result of nature or weather, the public and sometimes even by higher acts of God.Works of art can thereby change their form and meaning. Give the site-specific discursivity of our current project, a particular artistic collaboration with the KVR resulted, in which the government office itself became active in an artistic intervention. 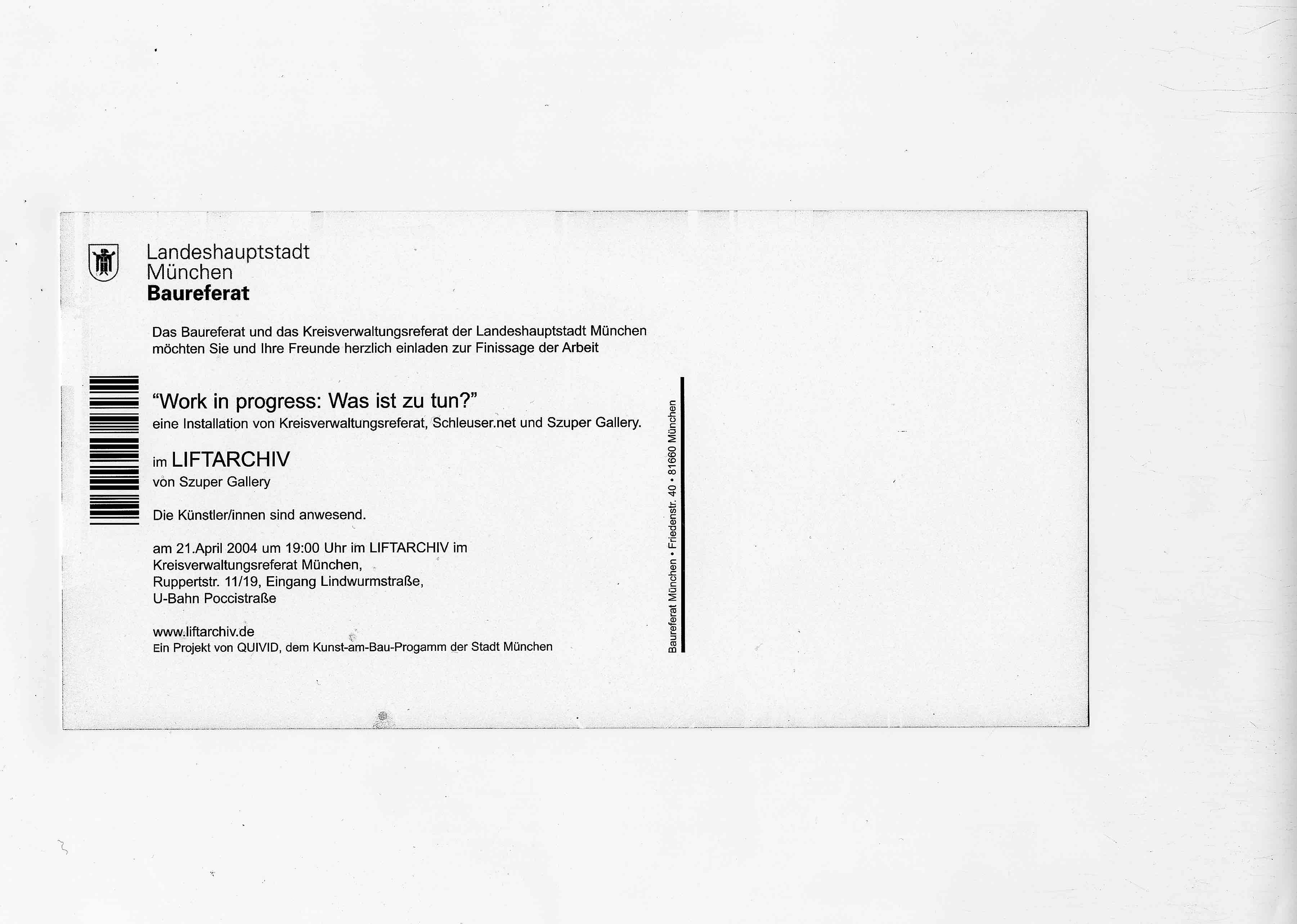 Ticket to the closing party

In an announcement the city justified its artistic action by claiming that the work that we exhibited was not compatible with the obligation a government office has to maintain neutrality and that it provoked the employees of the office. These claims were asserted again by the directors of the office in two publications: in an interview for Bayerischer Rundfunk (Bavarian television and radio) and in an article in the Munich tabloid newspaper TZ.

The latter placed the work in the context of sex and created a montage of images that itself can only be called an autonomous, graphic and interventionist work. Strategies of covering up in the public spaces are part of the canon of contemporary art. The act of covering up the installation that this government office undertook has now been taken a step further by us, and we would like to introduce you to it in the course of a new event. We would like to invite you to this closing party. 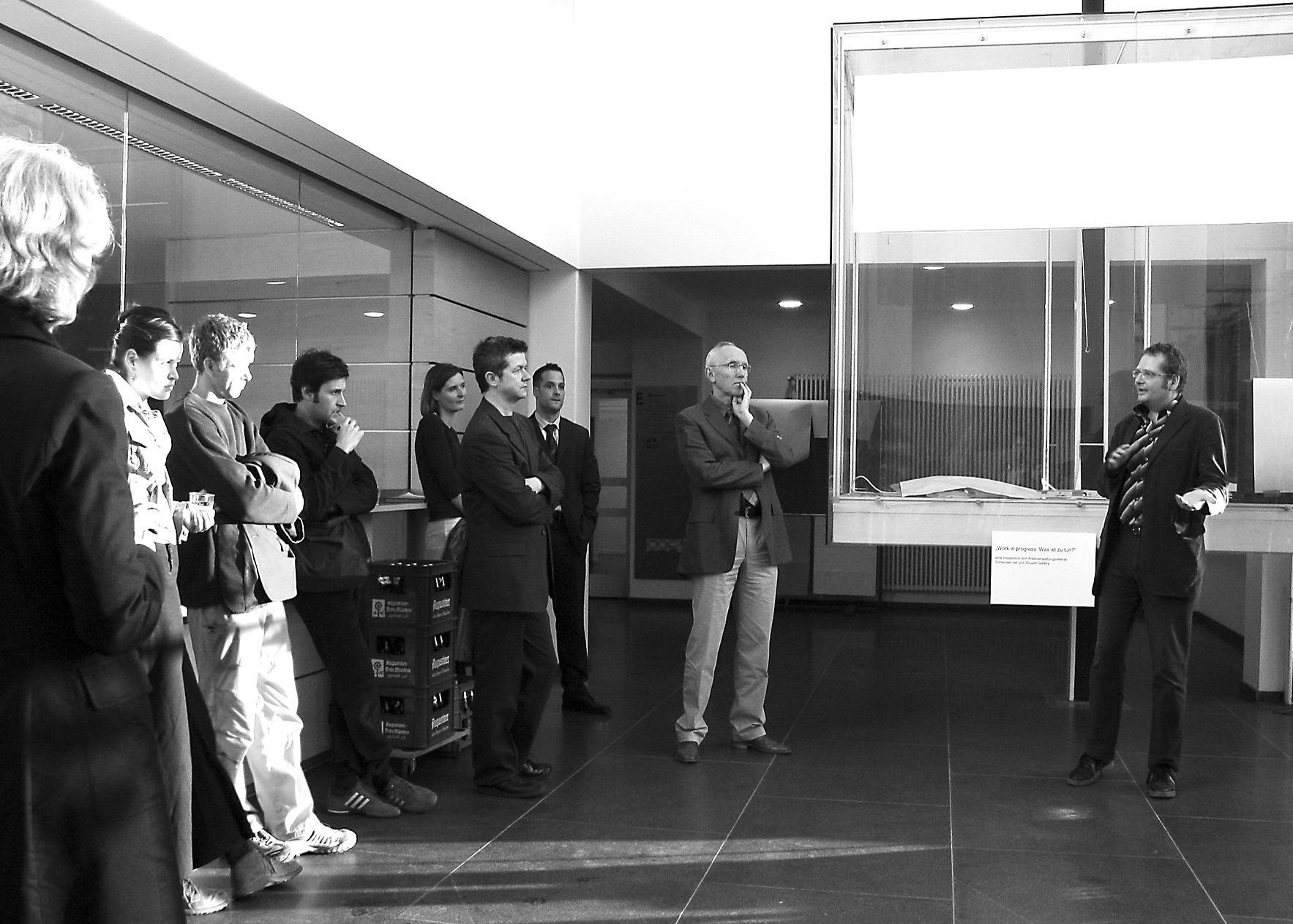 Talk at the Closing Party