Why don’t you stick to the facts?

Why don't you arrange your affairs satisfactorily?

The Liftarchiv was commissioned and hosted by municipal authorities, who are obliged to remain politically neutral. There is a certain expectation of an art project in this semi-public space that it represent the governmental office and hence also respect the latter’s claim to neutrality. Should we or must we try to remain “neutral” in such a controversial context, avoiding taking sides in the artistic process? If we do so, is it possible to prevent the project from mutating into a “formal-neutral” decoration? What is “neutral”, really, when “neutral” means neutral or in fact its exact opposite? These questions were answered by the work and its process, for the course of the projected showed that the artistic gestures that at first might seem inconspicuous or even neutral to us were inevitably interpreted in this semi-public space as either judgemental, biased or politically motivated. 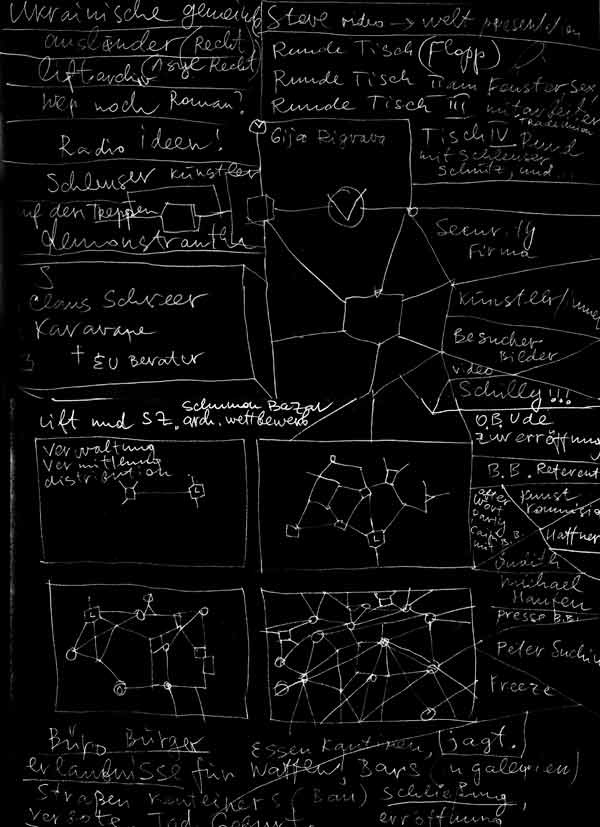 One possibility for getting around this dilemma and the role of the artist who is commissioned by the state or an institution is perhaps the strategy that Michel de Certeau calls “la perruque”, or “wig”.The “wig” refers to a practice and behaviour that is probably found at every place of work. It is work that employees do for themselves, but disguised as work for their employers. It does not mean that the employees steal or simply do not show up for work; rather, they produce something for themselves during working hours. Normally, such activities are sanctioned or LA #C Why don’t you stick to the facts? Why don’t you arrange affairs satisfactorily? just ignored. In fact, however, employees who use the “perruque” strategy are effectively stealing time from their employee that is, according to Certeau, free, creative and not directly profit-oriented.The point is to spend time for one’s own needs, but without the employer noticing. 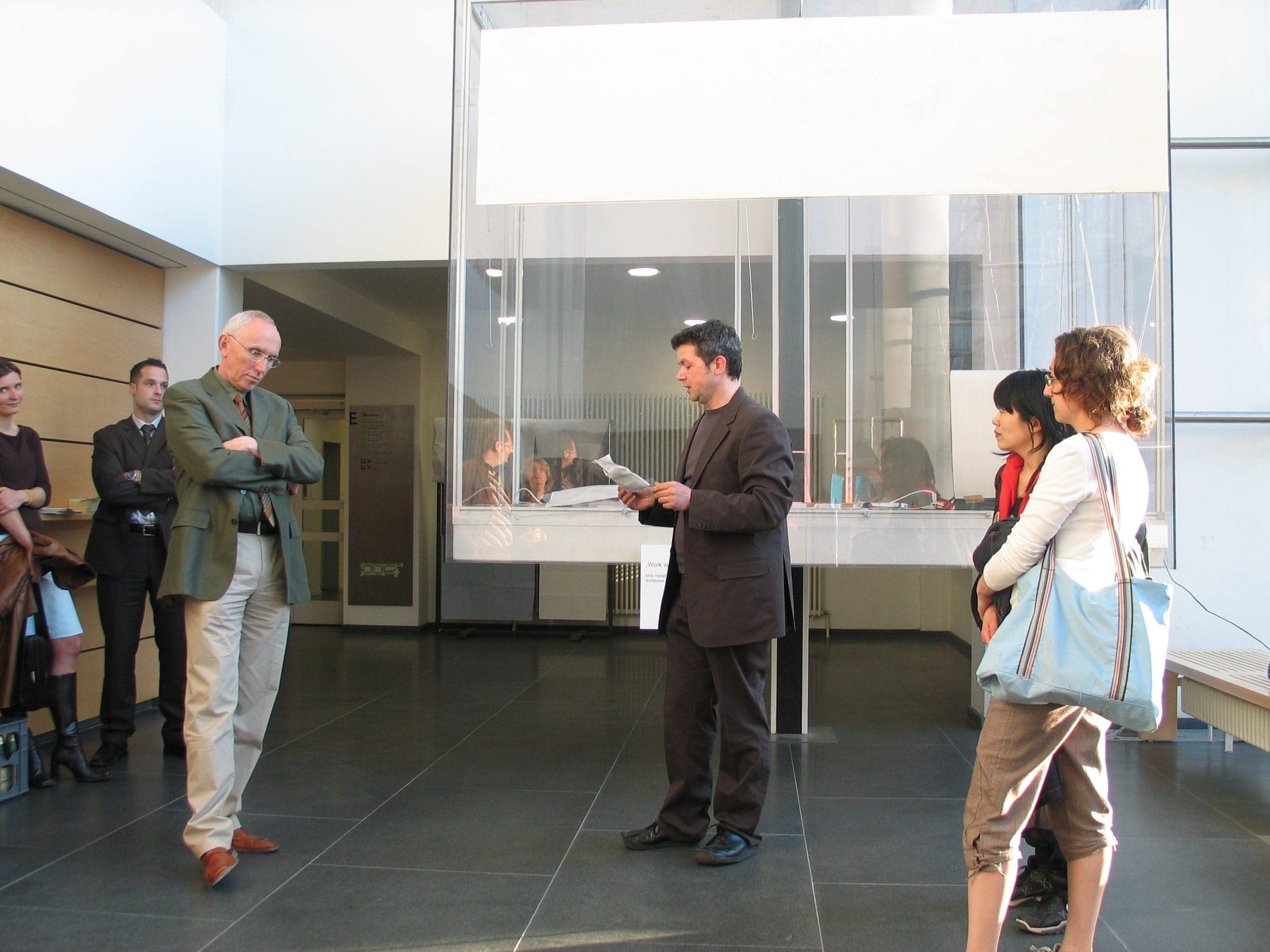 The opening of the archive

It is a strategy that circumvents the usual order and one that introduces a new aspect, a new reality or narrative strand into the institution one serves. Is “perruque mimicry” a virus-like strategy for dealing with public commissions? In the Kreisverwaltungsreferat (KVR; District administration department) we tried to introduce a quasi-autonomous project space with a glass shell through which one could see, but that nonetheless demarcated it from its surroundings.At first glance, the Liftarchiv seemed to be adapted to the ideas behind the architectural design of the government building. It imitated its programme of transparency, as expressed in the breaking open of the façade.The up and down movements of the lift also symbolised, in retrospect, the course of the project.The Liftarchiv became a kind of experiment for autonomous work within an institutional structure.The changing exhibits were in the character of suggestions, associations or screen tests.We avoided finished paintings, attempting instead to present a variety of installations with collaborations between artists and groups and even with the government office itself, which thus became a co-author. The course of the project was open and subject to constant change.We were constantly writing new proposals and then rejecting them again. Disorder ensued.We were repeatedly asked to arrange our affairs. Over time, we observed that the organisers, the visitors and the employees of the office were sometimes very critical of the project. It was difficult to confront this existential conflict with an artistic approach; nevertheless, the work was of course supposed to survive in that context. 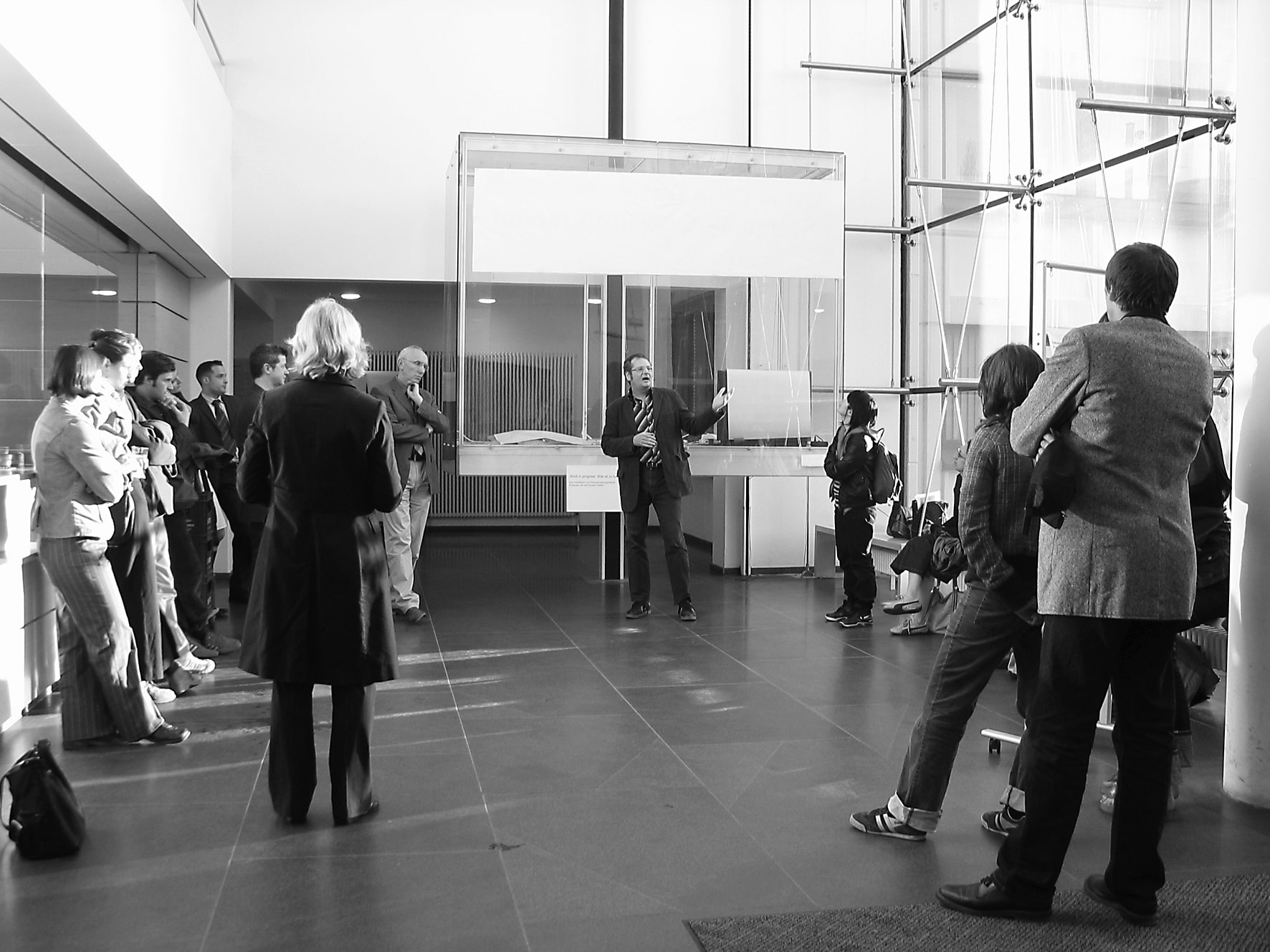 In general, we found that the Liftarchiv was noticed more by the employees than by the visitors to the building. For the visitors, their own existential interests took precedence here.They only rarely had the time or “effort” to get involved in such interventions at the government office, and they did not even always recognise it as such. For some employees, by contrast, it was very present, and sometimes it was even perceived as a provocation. It was unusual for us that the objects, gestures and words that were presented in the Liftarchiv were taken by the employees to relate directly to the governmental authority itself.The microcosm of the office had an effect on the work of art. Several employees reported that visitors took the installation as an occasion to criticise the authority; for example, the red sofa in the Liftarchiv was mentioned and then the question asked whether it was the sofa on which the civil servants rested.Another example of an object we thought of as rather neutral being turned into a judgemental one. In our video performance Nirvana, the office building at night became the site of a surreal encounter of three people moving through the halls of the KVR following an absurd, strange choreography.The functional atmosphere of the office became a permissive, anarchistic playground.After the video had been running for a month, several employees protested.The discussion with the staff council and the women’s representative revealed that the absurd actions of the actors in the video were read not as liberating forms of play but directly as judgemental commentary about the relationship of the employees to the visitors.The depiction of women in the video was perceived as sexist by several female employees. And so over the course of the project we repeatedly met with various employees in small crisis meetings. Both sides, the government office and we too, stubbornly represented our positions. 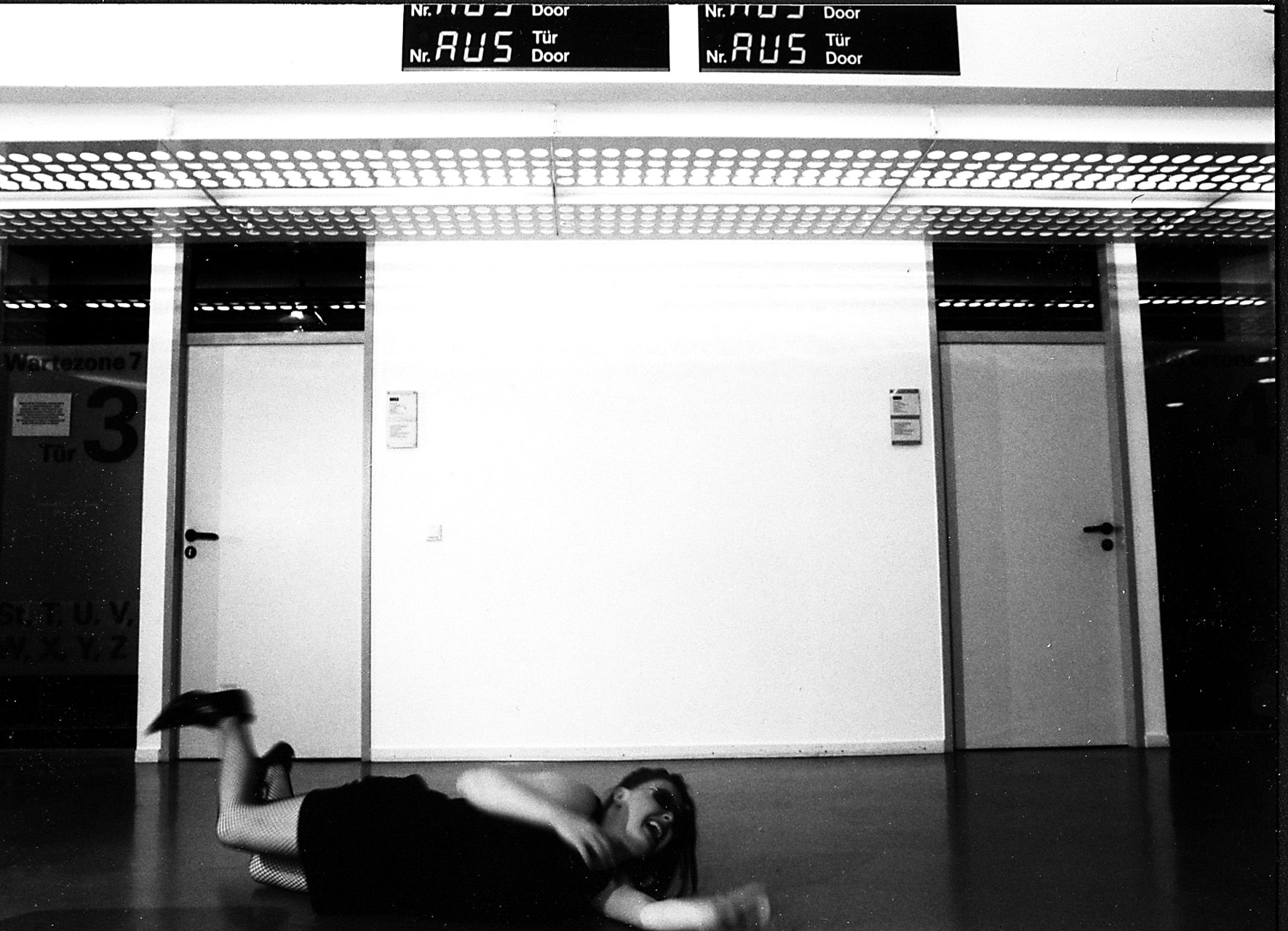 In the end, however, again and again a compromise was found. Once we agreed to turn off a video. Another time the office was prepared to acknowledge joint authorship of the installation it decided to cover up and thus participated in the joint presentation of a mutated work. Why should a government office get involved in art at all? Again and again, there were discussions with the employees. Several of them became intensely involved with the work; others said that they had neither the time nor the interest and that this sort of thing would be better off in a museum, because here it was perceived only as a disturbance. For example, several of the guards became very involved in the project for a time. They would often hang 20 around the hall and talk to us, making comments, asking questions. It came out that they had come up with the name Nirvana for the Liftarchiv. Was it possible to insert into an institutional structure an autonomous structure that in some respects contradicted the institu-tion? That question has no simple answer.The compromises we made and failure as such were the topic and subject matter of the project. The governmental office is a critical observer of art; our work was taken seriously here and moved us. We ourselves navigate somewhere between chaos and the solid facts and were perhaps unable to arrange affairs satisfactorily.